Are we on the pavement to nowhere ? (with apologies to Talking Heads) 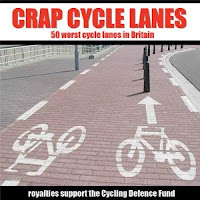 Well, if the growing number of complaints about the cycle lane developments on Manchester Road in Chorlton are anything to go by there may soon be a "Crap Cycle Lanes on Pavements" edition being produced.

A recent article in the South Manchester Reporter highlighted concerns from local people in Chorlton about the sudden appearance of white paint cycle markings on a narrow stretch of pavement alongside the Unicorn store on Manchester Road. 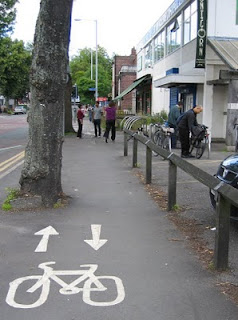 In fact, this "shared use" section of National Cycle Route 55 has been in the planning stage for quite a while and was sent out for consultation by Manchester City Council's Engineering Services in late 2008 / early 2009. At the time the consultation document stated that "It is anticipated that the proposed scheme will be implemented in the Spring of 2009." Clearly the timescale slipped a little!


The blue circle signs on Kensington Road indicate that this shared use route is considered as an "unsegregated shared facility which is a cycle track with a right of way on foot".

The consultation document also stated that the purpose of this section of Off Highway Shared Use Area on NCR 55 was "To provide a safe crossing point for the route over Manchester Road,  it is proposed to introduce an unsegregated shared use area from Albany Road in the south to allow access to the existing controlled crossing outside Chorlton Leisure centre, demarked through the use of shared use signage and corduroy paving to assist those pedestrians with visual impairments."

The South Manchester Reporter article quoted Pele Bhamber, Manchester City Council’s head of highways services as saying that "The preferred option was to use the pavement and the businesses forecourt area as a shared space for pedestrians and cyclists, rather than the removal of the limited parking bays to the front of the shops."

Which seems to be a little bit at odds with the text in the consultation document that stated: "To allow for two-way cycle access to the controlled crossing on the west side of Manchester Road, it is proposed that the limited waiting bay outside 109 Manchester Road be removed and built up to footway level to provide additional width for shared use operation and provide
access to the controlled crossing from Kensington Road in the west."  See the consultation map for more details.

Whilst the physical engineering work will have been done by Manchester's Highways Services
department - the national cycle route design and co-ordination is undertaken by the national charity, Sustrans.  Who produce an "Information Sheet on Shared Use Routes" which acknowledges concerns about the potential for conflict between different user groups accessing shared space.

The Sustrans Information Sheet also provides the following guidance with regard to the width of shared use facilities: "On well used unsegregated shared use paths we recommend a minimum of 3m width. Where paths are lightly used and there is a clear verge on both sides a minimum width of 2m may be sufficient."

It is difficult to see how this section of shared use pavement meets the requirements of Sustrans
own design guidance.

In the report 'Support for cycling as mode of transport', presented to the Manchester City Council - Communities and Neighbourhoods Overview and Scrutiny Committee in November 2009, it was stated that: "When considering the safe shared or segregated use of off-road facilities for
pedestrians and cyclists, the City Council uses guidance laid out in the Department
for Transport, Local Transport Note 02/08 - Cycle Infrastructure Design." It was also stated that the overall number of reported pedestrian vs cyclist casualty figures for the three-year period (01/11/04 to 31/10/08) was thirteen. These included:

Judging by the volume of complaints regarding cycling on pavements in the letters and comments pages of local Manchester media - an obvious problem with these figures is that most people do not appear to formally report the many "near misses" that occur on shared use areas in Manchester. It will be interesting to see what increase (if any) in casualty figures occurs for this shared use route.

But back to the Department for Transport Local Transport Note 02/08 or "Cycle Infrastructure Design" guide.  This states that "In general, offroad cycle routes in urban areas tend to be the least desired option, and it is usually better to cater for urban cyclists onroad if this is practicable. Offroad routes are often created by converting existing footways/footpaths and, if such routes are not carefully designed, pedestrians may view them as a reduction in quality of provision."  It also contains an interesting Hierarchy of Provision (below) that advises which options local authorities should consider when designing cycling infrastructure. 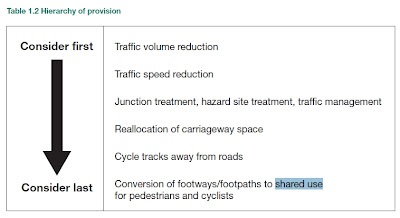 It is interesting to note that "Conversion of footways/footpaths to shared use for pedestrians and cyclists" comes in the "Consider last" category.

The Cycle Infrastructure Design guide draws considerably on the earlier Local Transport Note 2/86 Shared Use by Cyclists and Pedestrians report published in 1986. This states that:


"Unsegregated facilities: No kind of segregation is likely to be effective if some users are likely to move regularly across the segregating line. For segregation by white line, colour contrast, or surface texture, the likelihood of ineffective operation is present for any facility whose width is less than those suggested in Table 2 (above). Consequently, if road safety gains merit conversion of such a narrow foot way or footpath this should normally be to unsegregated use. (6.19)"


and that: "Unsegregated shared facilities have been provided, and have operated safely, down to 2.0 metres with considerable - some 100 to 200 per hour - use by pedestrians and cyclists. Cyclists have also safely passed pedestrians, including those with prams and wheelchairs, on even narrower unsegregated shared facilities down to 1.5 metres wide where there have been grass verges. (6.21)"


Well so much for the national guidance - how does this match up with the cycle infrastructure that has been delivered on the ground in Chorlton? 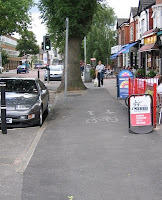 After crossing Manchester Road at the pedestrian crossing, the National Cycle Route 55 continues along the Manchester Road pavement until turning left onto the pavement of  Kensington Road.

This section of pavement may nominally meet the 2m metre width requirement - but without adequate (any !) enforcement to prevent pavement parking and combined with wheelie bins on the pavement - in reality this route will be much narrow making the shared use of this space even more difficult.

Many people regularly cycle on the pavement because they do not feel safe cycling on the roads due to the speed & volume of traffic as well as the aggressive driving behaviour of some road users. Clearly, there is a real need to provide  safer routes for people who are not confident or experienced enough to cycle on the road network. High quality / well designed shared use facilities can help meet this need.


But according to the national Cycle Infrastructure Design guide "Conversion of footways/footpaths to shared use for pedestrians and cyclists" is supposed to be the last option considered - after "Traffic volume reduction",  "Traffic speed reduction",  "Junction treatment, hazard site treatment, traffic management", "Reallocation of carriageway space" and "Cycle tracks away from roads" options have been explored.


The consultation documents do not appear to have offered any other options from the "Hierarchy of Provision" and there are real concerns that poorly designed "shared use" schemes are a typical English "lowest cost" approach to cycle infrastructure.  Instead of re-engineering the roadspace to create high-quality European-style segregated cycle routes - we settle for painting "white paint" cycle designs on pavements that are too narrow and will (almost by design) create conflicts between pedestrians, elderly / disabled people and cyclists.

If you want to like to take this issue up with the Council then you can of course contact your local councillor or communicate with:  Enviroment On Call
By telephone: 0161 954 9000
Email: contact@manchester.gov.uk