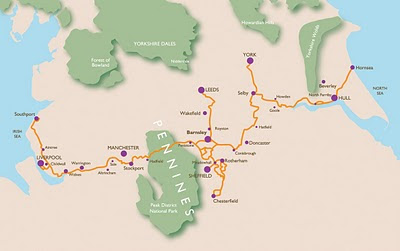 For those who have not yet discovered the Trans Pennine Trail (TPT) it is an "exciting route for walkers, cyclists and horse riders linking the North and Irish seas, passing through the Pennines, alongside rivers and canals and through some of the most historic towns and cities in the North of England."

The Trans-Pennine Trail runs coast-to-coast between Southport and Hornsea and is 215 miles (346Km) long. A north-south route connects Leeds and Chesterfield and a spur to York means there are approximately 350 miles (560 km) of Trans Pennine Trail available for people to explore. Within Greater Manchester, the TPT winds its way through Trafford, Manchester and Stockport. The website describes how canal and railway paths take you through Warrington to Trafford, where the TPT picks up the River Mersey once again following a winding riverside path along the Mersey through the southern suburbs of Manchester, passing by Chorlton Water Park and heading via Didsbury to Stockport. 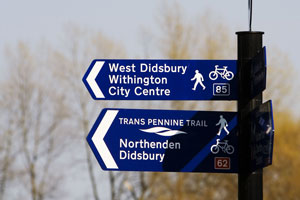 Last year, the Trans-Pennine Trail celebrated its 21st birthday with a series of events supported by Manchester, Stockport and Trafford councils and people from the local communities who enjoy using the Trail.

The Trans-Pennine Trail provides an ideal traffic-free route to encourage a wide range of walking and cycling activities for both recreational, utility and commuting journeys so at a time when Greater Manchester is developing policies in the Local Transport Plan (LTP3) to encourage more people to walk & cycle you would hope that the Greater Manchester Passenger Transport Executive (GMPTE) would be working to improve the facilities and access provided by this wonderful local resource..... unfortunately current proposals from GMPTE/Metrolink would suggest otherwise. 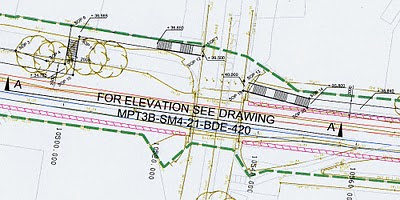 Apparently, the original designs provided to Manchester City Council and Sustrans indicated that the Trans-Pennine Trail  would make use of ramps at the Sandhurst Road area – thus ensuring that a level access route was maintained.  Despite protests from various user groups, Metrolink seem unwilling to recognise that introducing a series of steps, into what was previously a level access cycle and walking route, will create a major obstacle for a wide range of current, and potential users.

GMPTE/Metrolink did consult on the proposed modifications to the TPT but because the initial development plans indicated that ramps would be used, providing continued level access, the concerns raised were mainly in relation to the temporary re-direction of the TPT.

It was not until late February 2011 that it became apparent that the upgraded Trans-Pennine Trail would now involve the installation of a series of steps which would have a major impact on access.  Enquiries about the possibility of consultation and consideration of other options received the following response:

“[There is] No opportunity to influence the design… this is the design that we are going to construct.”

Not a response likely to re-assure local residents and user groups that their concerns and needs are being taken into account by Metrolink.  Enquiries about why the initial designs have now been changed to steps, received the response that the use of ramps were not feasible as they would “cost millions”. So far, no information has been provided that outlines which, if any, alternative options were examined or what the criteria and cost figures are for the steps or ramp options.

Metrolink is currently saying that each set of steps will have “cycle gutters” to enable people to wheel their bicycles up and down the steps.  But this will not be much use for people carrying loaded panniers who will struggle to achieve such manoeuvres – whether they are cycle touring or simply returning from the local shops with their weekly groceries. Also, many users will find the steps an unwelcome and impassable barrier. People such as parents with prams or double pushchairs, electric and manual wheelchair users and their attendants, mobility scooters users, families cycling with child buggies or “tag-alongs” and many mobile elderly people who struggle to navigate steps. Many people are likely to find it very difficult, if not impossible, to navigate six sets of steps and will therefore be effectively deterred from using the Trans-Pennine Trail.

Now, the land that the Trans-Pennine Trail is situated on is currently owned by Manchester City Council - who also have responsibilities for the maintenance of the TPT within the Manchester area. So it can be argued that the Trans-Pennine Trail should be considered as a facility or “service” provided by Manchester City Council for the residents of Manchester. If this is indeed the case, then according to the Council’s Access 2000 Strategy:

“Since October 1999, there is a duty presented by Part III of the Disability Discrimination Act to ensure that every Council service is accessible to disabled people. The Access 2000 Strategy will help to ensure that no part of the City Council creates physical barriers to disabled people using its services. By carrying out best practice for its own design schemes, the City Council will be leading by example, in order to encourage others to follow suit.” (Emphasis added) (Section 1.4)

This would seem to make a strong case that Manchester City Council must intervene in this case to ensure that Metrolink, acting as a developer in this case, do not create physical barriers that prevent disabled people, and other residents, from accessing the Trans-Pennine Trail facility.

There is a certain level of irony when reading the commitment outlined in the draft that Greater Manchester Local Transport Plan (LTP3) proudly claims that: "Our proposals to improve the coverage and quality of public transport, to manage the highway network, improve the pedestrian environment and remove barriers to cycling will help to encourage more car users to change the way they travel."  (Section 4.3.3.1, Page 34, Draft Local Transport Plan - LTP3).

It will also be interesting to see what the Department for Transport make of any bid from GMPTE (soon to be Transport for Greater Manchester) for Local Sustainable Transport Funds (LSTF). The DfT assessment criteria for LSTF bids includes the following:

"28. Proposals which also demonstrate the following characteristics will be favourably considered in the assessment process.

* have the support of a range of community interests; and
* incorporate plans for partnership working in the design and delivery of solutions with external bodies, which could include the private sector community and voluntary sector organisations and transport operators." (Page 14).
The Trans-Pennine Trail provides an ideal traffic-free route to encourage a wide range of walking and cycling activities for both recreational, utility and commuting journeys. The Metrolink extension to Didsbury should be providing an ideal opportunity to improve the quality and access to this popular service.

It seems unlikely that if, as currently planned, Metrolink effectively trashes the Trans Pennine Trail that this will do much to encourage support from local voluntary and community groups!

If you value the Trans Pennine Trail and would prefer that Metrolink does not create barriers to people walking and cycling on the TPT then please consider doing one (or more) of the following:

1) Email the councillors on the Greater Manchester Integrated Transport Authority (GMITA) who are supposed to provide oversight and guidance for Metrolink. Those nice people at Love Your Bike have created an email action to help you contact all the GMITA members in your local area.

2) Or send your own message to your local councillors who are members of the GMITA.

3) Attend the Manchester Cycle Forum on Tuesday 15th March.  A GMPTE representative will be attending to discuss Metrolink / Trans Pennine Trail and am sure they would love to hear your views.

4) Attend the Stockport Cycle User Group on Wednesday 16th March. A GMPTE representative will be attending to discuss Metrolink / Trans Pennine Trail and am sure they would love to hear your views.


Email action - In just two days, over 240 people from all 10 GM council areas have sent emails to their local councillors who are GM Integrated Transport Authority members asking them to request Metrolink to come up with a better solution.
Manchester Cycle Forum (15th March) - After 50 minutes of discussion and detailed objections, Councillor David Royle, who chairs the Cycle Forum, made it very clear to the Metrolink representative that they must rethink their plans. "This is NOT the right solution".
Manchester Friends of the Earth / Love Your Bike tabled the following resolution which was passed unanimously.
"This Cycle Forum is seriously concerned that the current Metrolink proposals to introduce sets of steps into the Trans Pennine Trail in the vicinity of  Sandhurst Road, Didsbury will seriously degrade access to the Trans Pennine Trail for both visitors and local residents of Manchester. This cycle forum calls on Manchester City Council to work with GMPTE/Metrolink to ensure that the Trans Pennine Trail continues to offer 'access for all' to encourage more people to walk and cycle on the Trans Pennine Trail for recreational, utility or commuting journeys."

Inside the M60:  Cyclists up in arms over Metrolink proposals to install steps on Trans Pennine Trail

Fetch.It Didsbury: Metrolink – a step too far for the Trans-Pennine Trail

Ask Bury: Metrolink – a step too far for the Trans-Pennine Trail
Posted by Bicycle Pete at 16:25