Transport for Greater Manchester (TfGM) has just launched a 12-week statutory consultation on proposals for a second Metrolink line across Manchester City Centre which will run between Deansgate (GMEX) and Victoria via Cross Street to help prevent City Centre bottlenecks on the tram network. 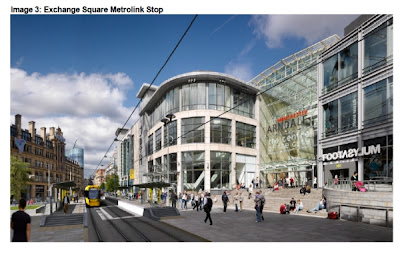 The proposed route runs along Lower Mosley Street, through St Peters Square and along Princess Street (by the Town Hall) before turning right into Cross Street. The artists impression (right) is from the Second City Crossing Route proposal (page 28) presented to the GM Integrated Transport Authority committee meeting on 18th March 2011.   It may only be an artist’s impression but shows no provision for cycle routes/paths and Manchester's cycle campaigns are concerned that the new Metrolink route result in the loss of Cross Street/Coronation Street as a well-used low-traffic,  two-way route for people cycling across the City Centre.
One of the pinch points will be the area between Marks & Spencers and the main Arndale building where the road is fairly narrow. It is rumoured that the "solution" in this area will be to create "shared use" pavements.  As one of the busiest shopping and (pedestrian) commuter streets in the City Centre it does not seem much of a solution to me - more a recipe for collisions with pedestrians (and yes, I know that people could get off and walk their bikes through that section but unfortunately many people don't/won't).
Now it is likely that many people will simply cycle along the tram tracks but not a solution that is likely to appeal to people new to cycling or encourage people to try cycling for the first time.
The latest GM Local Transport Plan (LTP3) contains a number of Priority Commitments.  One of which boldly states that: “Our proposals set out ways to… remove barriers to cycling” (page 44). If Manchester wants to increase the number of people cycling then it is vital that there are safe and pleasant cycle routes across the City Centre.  In transport planning jargon we need to increase the ‘permeability’ of the city.
I do not believe that the Metrolink consultation will see any major changes to the new tram route but we could use the consultation process to raise the need for better (and more pleasant) cross-city cycle routes and to lobby for Manchester City Council to include such designs and improvements in any negotiations with Metrolink - a similar process to the Section 106 funding often required for planning approval.  It only seems reasonable that if Metrolink remove access to a cross-city cycle route that they be required to fund suitable replacement routes (or am I being hopelessly naive and optimistic?).
If you would like to send TfGM your views on this issue then the deadline for consultation reponses is 9th September 2011.

TfGM say that they would like to hear the views of local residents, community organisations, businesses and anyone who visits the city centre for work or leisure.  There are 3 ways to send in your views....
Happy consulting !
PS the Metrolink 2nd City Crossing issue will be discussed at the Manchester Cycle Forum on Tuesday 14th June.  Venue: University Place (Oxford Road), Room 5.205.  Time: 5.15 - 6.30pm.
More details should be available on MCC Cycle Forum webpage.
Posted by Bicycle Pete at 14:43